Get me outta here!

Meet our new team of art teachers for the 2019 Summer Art Workshops!

Teacher Nicole: Nicole Bautista is a graphic designer , illustrator and art teacher based in Manila, Philippines. A graduate of Advertising Art and Secondary Education from Far Eastern University. She has also studied Basic Fashion Design at Fashion Institute of the Philippines. Her art style is  mix of traditional and digital art. She loves mixing found object like stickers and receipts, she also takes cues from rock and roll to tell story. Her inspiration mostly comes from old films and  music, iconic people, history and tragedy. 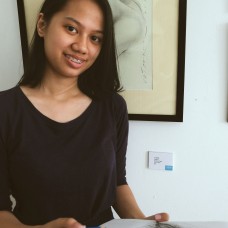 Teacher Nadine: Nadine David is a visual artist based in Bulacan, who studied Fine Arts Major in Painting from the University of Santo Tomas. She has participated in several art exhibitions during her college years and frequently joins conventions to sell her artworks. Teacher Nadine enjoys creating character designs and painting portraits whether traditionally or digitally in her own time. Her works are generally semi-realistic and illustrative in style.

Teacher Carol: Anne Cristine Carol Elbo is a graduate of BS Industrial Technology Major in Drafting with honors from the Eulogio ‘Amang’ Rodriguez Institute of Science & Technology, Cavite campus. and later worked as a college instructor from said campus. Teacher Carol is a photographer, visual illustrator, graphic designer, art advocate from local art organisation Guhit Pinas, and World Peace advocator from a lay Buddhist organization. Her work is greatly influenced from time alone with the television as well as  daily lives in streets.

Teacher Carzen: Carzen A. Esprela (b. South Cotabato, PH, 1994) is a graduate of University of the Philippines in Diliman, with a Bachelor of Fine Arts degree (major in Painting). Through sculptures made of epoxy and found objects, and paintings made of oil or acrylic, and rubber latex, Esprela depicts his personal experiences and how these eventually turn into memories. Since 2013, Esprela has been participating in various group exhibitions in the Philippines; among them are Base Camp (Maximus x Tin-aw Art Gallery, Makati, PH) in 2016, New Works For the Mona Lisa Project (West Gallery, Quezon City, PH) and Drop-Off Point (Orange Gallery, Bacolod City, PH) in 2017, and Death Cleaners (Art Informal, Mandaluyong, PH) in 2018. His thesis work titled Bag In A Boat was part of group shows 8 Questions(Tin-aw Art Gallery, 2016), Traversals/Trajectories: Expansive Localities(UP Vargas Museum, 2017), and was featured as one of the Special Exhibitions in Art In The Park 2017. 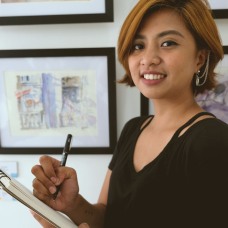 Teacher Jade: Jade Gacuan is a Vizcayan artist based in Manila. A graduate of Fine Arts Major in Painting from Far Eastern University, Cum Laude, she has worked as a Graphic Designer in the Metropolitan Museum of Manila and continues to pursue her fine arts career. She had her first solo exhibition in 2016, 365: Art of Being Alone–an exploration of the desolation of everyday life in the province and the city, contrasting urban and rural life as well as finding sentiments and healing in the lonesome life of being independent. In her most recent exhibition Immured Arcadia, held on February 2019, she used her art to raise awareness for Mental and Emotional Health. Through this exhibition she was able to collaborate with writers’ literary pieces, calling forth the newer generation to be vocal about these concerns.

Teacher Corinne: Corinne Garcia is a practising visual artist, illustrator, & teacher whose works span various media often marrying painting, photography, design, and performance. She is a Fine Arts graduate from Ateneo de Manila University with a Major in Information Design, Minor in Philosophy. She uses this education to tackle topics of spaces, social rituals, feminism, and the self, intertwining these in her art. Her works have been exhibited locally, most recently in the 2019 Present Archives photographic exhibition of the Alfredo F. Tadiar Library, and published in the art & literary folios of Heights Ateneo. During her years as an undergraduate, she has been a volunteer teacher for multiple humanities-oriented initiatives & activities. 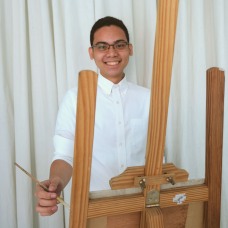 Teacher Kelvin: is a licensed professional teacher, artist, and art enthusiast. He is graduate of Bachelor of Science in Industrial Education Major in Art Education from the Technological University of the Philippines, Manila. After he graduated, he taught in a private school for three years as a Makabayan Teacher. He is currently a member of the art-making community Guhit Pinas for four years, and has been the moderator of the Guhit Pinas: Quezon City Chapter for two years. He is a self-taught artist. For four years as a member of Guhit Pinas, he developed his skills in his chosen medium, working with charcoal for painting and drawing, and he continues to accept charcoal portrait commissions in the present.

For more information on all of our teachers, visit our full teachers’ profile.

Who says you can’t paint? 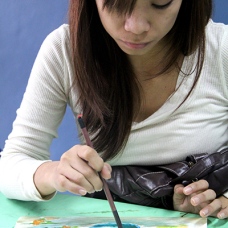 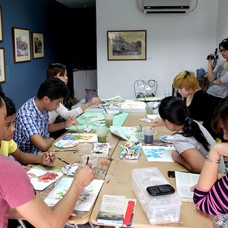 If you have questions or requests, email us:

Do you need fun, artsy activities?

Too shy to join a group art class?

We offer one-on-one classes to accommodate your preferred schedule. You may also schedule home classes to learn art at the comfort of your own home. For inquiries, drop us a message.
%d bloggers like this: